Before you buy Cyberpunk 2077 you need to know if your PC can run it well. Smart Game Booster and get your current PC system auto matched with the requirements and boost your PC performance.

Cyberpunk 2077 is finally out here on December 10th. This highly anticipated and ambitious game offers a thrilling gameplay experience on different platforms. If you're interested in playing it on PC, you might be wondering what kind of hardware you'll need in order to get an ideal experience a

Cyberpunk 2077 is an open-world, action-adventure story set in Night City, a megalopolis obsessed with power, glamour and body modification. You play as V, a mercenary outlaw going after a one-of-a-kind implant that is the key to immortality. You can customize your character’s cyberware, skillset, and playstyle, and explore a vast city where the choices you make shape the story and the world around you. Besides its reputation and quality, the reason for Cyberpunk2077 to get so much hype is that it also features a character named Johnny Silverhand played by Hollywood superstar Keanu Reaves.

“Cyberpunk 2077 throws you into a beautiful, dense city space and offers a staggering amount of flexibility in how you choose to take it from here.”

“If CD Projekt Red’s core competency is writing quests, worldbuilding is a complementary pillar of the studio’s works. And Cyberpunk 2077 is more evidence of this.”

“Cyberpunk's main quest storyline is full of interesting ideas, but marred by inconsistent characterization and focus. The action holds together well enough, an FPS charcuterie board featuring some familiar Deus Ex stealth and hacking systems alongside the snappy ADS gunplay Call of Duty made standard. ”

3.Price and where to buy

Price:$59.99 for the standard edition

Where to buy: Cyberpunk 2077 is currently being sold on all platforms. You can purchase the game on Steam, the Epic Games Store, Gog.com or Amazon.

The developer has already revealed the minimum and recommended system requirements for running Cyberpunk 2077 on a Windows PC. You can take it as a reference but not too seriously regard it as a strict benchmark. 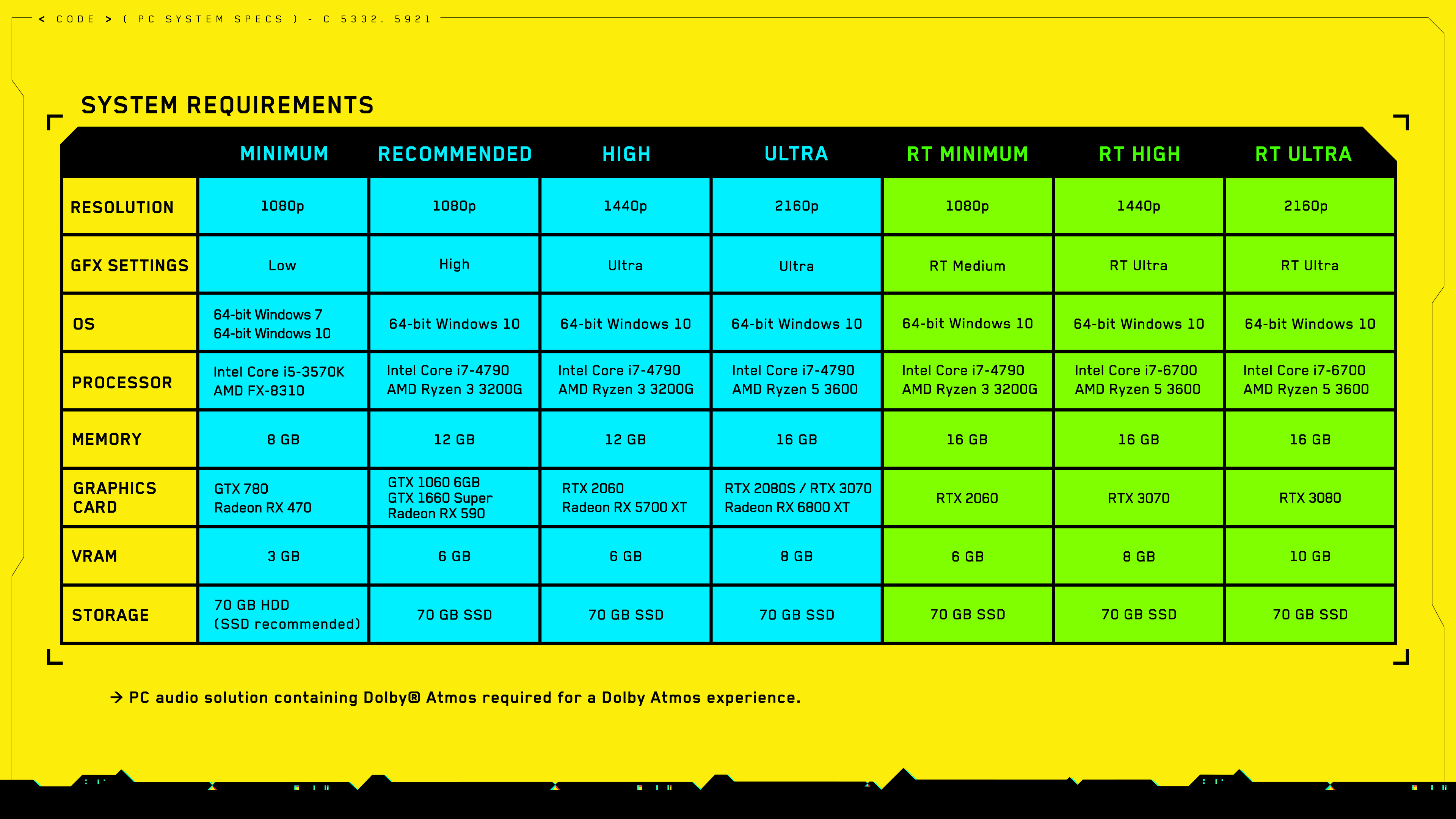 If you are tired of checking the comparisons one by one, it is highly recommended that you download a Smart Game Booster 5 beta for free to have your PC system and the required specs auto-compared. Search or select a game and click “Can I Run it?” and you can match your current PC with any games on Steam, Origin and etc to find out what are those to upgrade. 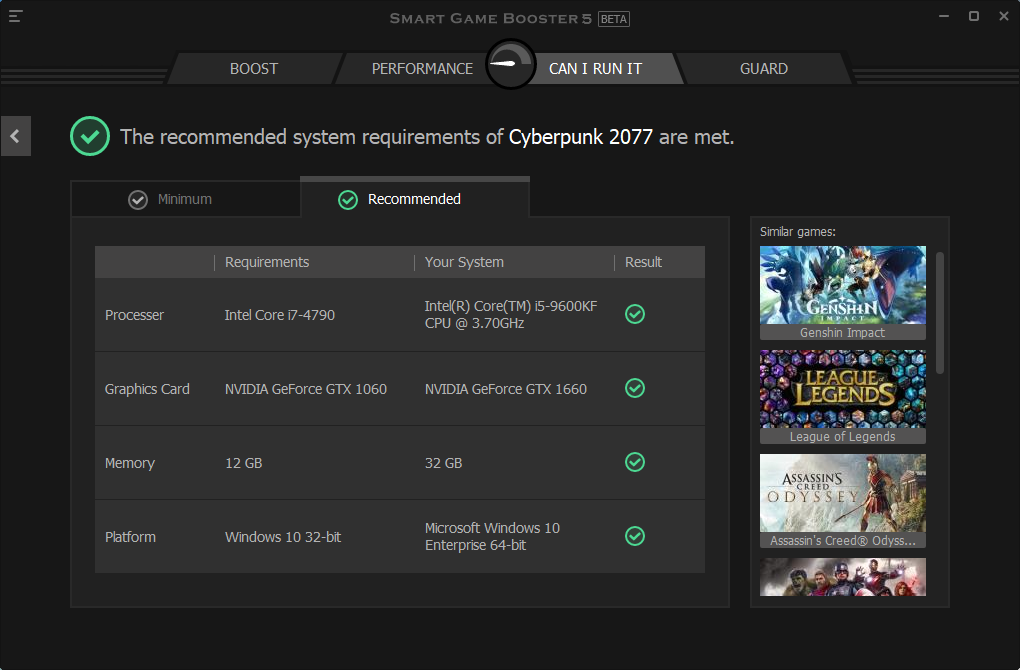 5. How to boost game performance with current system?

In fact, it seems the minimum system requirements to run cyberpunk 2077 is not demanding and we do not necessarily need a strict hardware upgrade to beat the recommended. In addition, Games tend to be more tolerant of older CPUs than of previous-gen GPUs, therefore even a CPU that's several generations old should still be good to run as well. With that being said there are things that can be easily done to optimize your current one to run this big game.

Some players have been struggling with maintaining frame rates while playing Cyberpunk 2077 on PC. It is known that GPU&CPU settings will hold you back from seeing the desirable graphics and if you are suffering from low FPS when playing action games like Cyberpunk, installing Smart Game Booster 5 could also help improve graphics and overall performance after a single click. 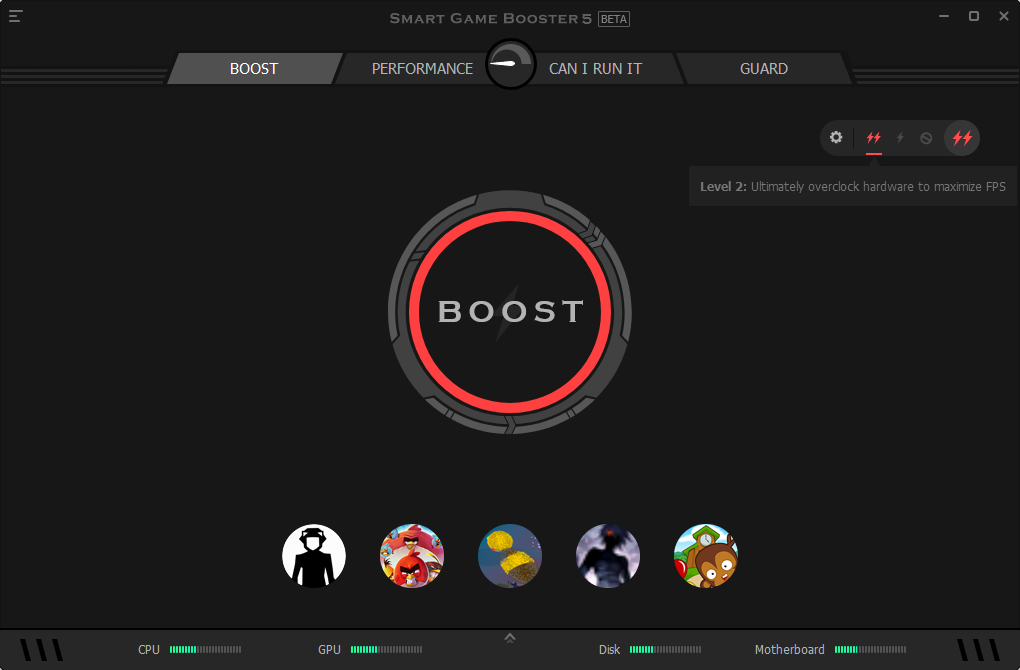 Outdated device drivers will cause low FPS, gameplay delay, frequent freezing, and crashes, updating your drivers can sometimes fix performance bottlenecks and maintain high-quality screen resolution and audio effect. It is time-saving to keep your drivers current with the automatic driver updater in Smart Game Booster 5 and it is free to use. With that being said if you want to conduct driver update manually check How to Update Drivers on Windows 10 to find out more. 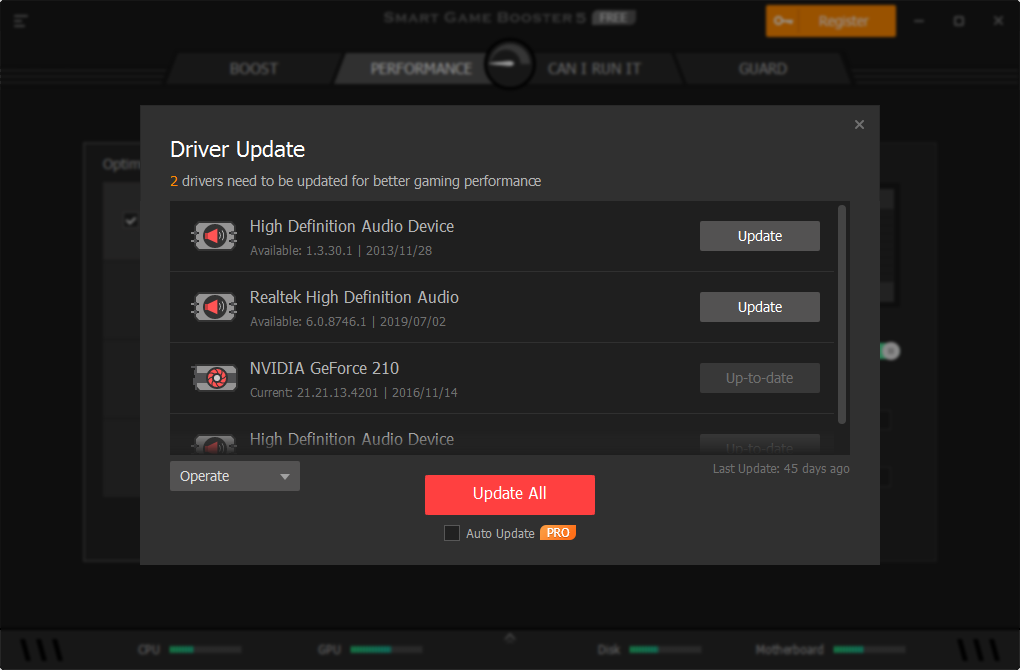 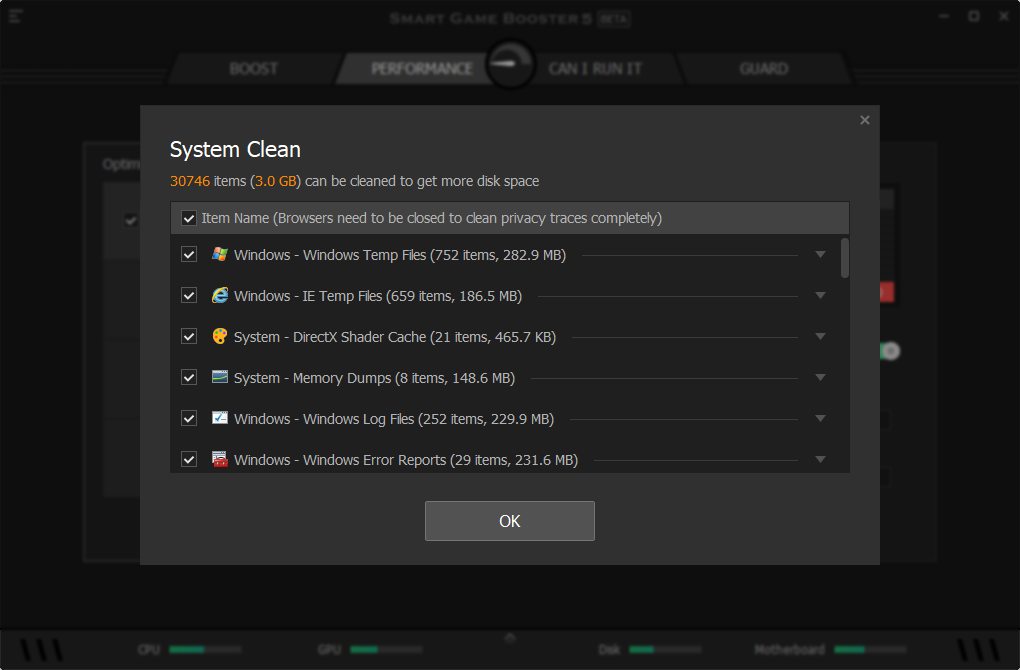 Take care of the hardware status

The smart game booster helps protect PC hardware by sending overheating alter during games to maintain the overclocking level at a safe extent. Users can monitor temperature and usage rate display of GPU&CPU at the corner of the screen to avoid burning risks. 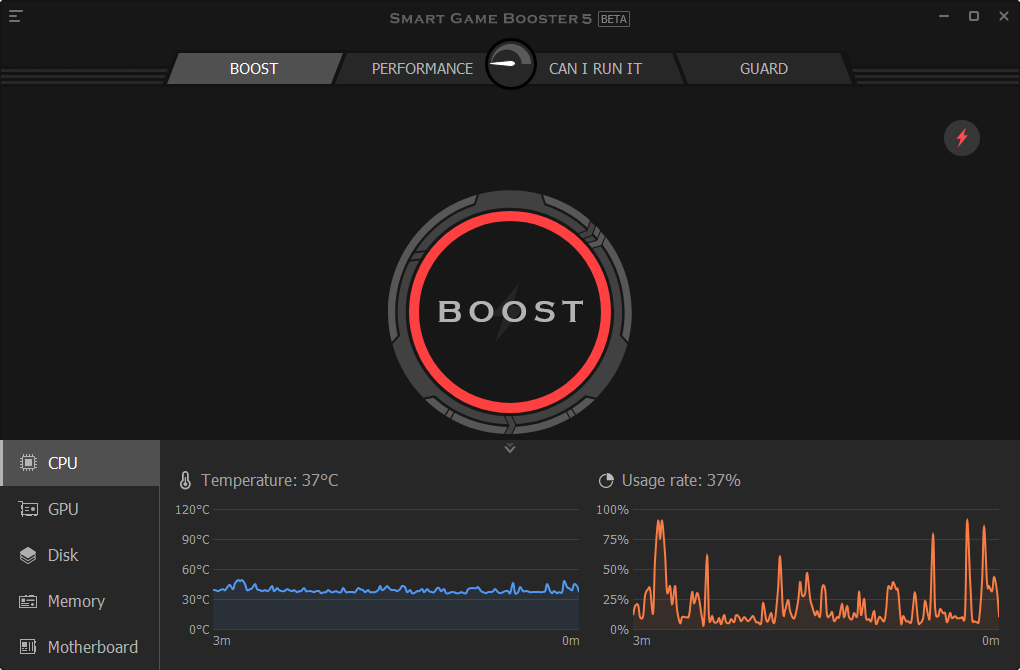