Home > Blog > What is Image Sharpening and How Does It Works for Games?

What is Image Sharpening and How Does It Works for Games?

Image sharpening algorithms are designed to enhance and maintain brightness in the regions of rapid change; mostly edges. The main purpose of image sharpening is to provide a vivid and more esthetic feel to the world of gaming. 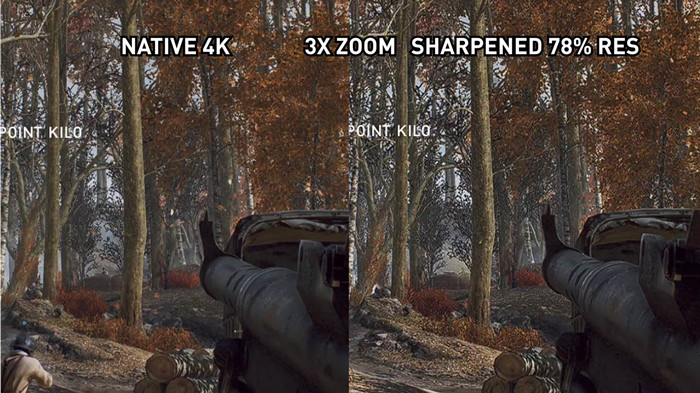 Image sharpening enhances the overall sharpness of the game to make it look more realistic. AMD and NVidia have been battling around to give their customers the best gaming experience. AMD has come up with the newest image sharpening algorithm, they claim that it is an image sharpening feature that provides better visual performance.

AMD is calling it Radeon Image Sharpening (RIS). They claim that RIS can come in handy at multiple stages in gaming. RIS will particularly come in handy when gamer down-samples the resolution of the game to increase frames per second (FPS) to minimize gaming lag. When the resolution of a game is decreased it makes the image softer than the original resolution, this is when RIS will come in handy. RIS will provide sufficient imagine sharpening to enhance gaming experience without using full resolution. This means that RIS provides virtually the same image quality without compromising on gaming performance.

Aside from that a lot of gaming companies are using temporal anti-aliasing (transformation speed of the object inside the frame is greater than the sampling rate of the scene) which results in softer image quality. RIS solves this problem, and provide the gamers with crisp and clear gaming image quality.

AMD has come up with an intelligent image sharpening algorithm that aims to provide gamers with unparalleled image quality. The biggest advantage of this technology is that gamers can enjoy games without any performance decrease (does image sharpening decrease FPS?).

AMD has claimed that RIS can provide image sharpening which will cause a 1080p display look like 1440p. It is done by fiddling around with higher contrast sections of the image and the algorithm artificially draws more details out of that. This process is claimed to be post-processing, which means it will not affect gaming performance.

Images of RIS were displayed by AMD, those images clearly showed the brighter more detailed view of darker edges of the picture. RIS also includes contrast adaptive sharpening (CAS) which is included in the FidelityFX suite. According to AMD, RIS is plug and play, gamers can switch on RIS from Radeon settings and they are good to go. Although developers can also implement FidelityFX suite according to requirements, RIS does not need any pre-processing. Unlike NVidia, Radeon has made RIS easy to use due to its post-processing capabilities. Now gamers can enjoy sharper image quality by turning on RIS from Radeon settings.

DLSS by NVidia is just a performance enhancer for Ray Tracing. While testing both the DLSS by NVidia and RIS by Radeon on BattleField V, the results were quite similar. The NVidia was running Ray Tracing followed by DLSS at 4K resolution while AMD Radeon was running RIS with enhanced 1440p resolution, both produced sharp and crisp images. The added benefit of RIS is that there were no performance lags due to post-processing implementation of RIS. The AMD system was running 1440p resolution which meant it could boost the frame rate up to 90 fps.

Looking at both image sharpening algorithms from NVidia and Radeon showed almost the same results. On close comparison at 1440p resolution, CAS along with RIS did a pretty good job at leaving the high contrast object untouched. Enhancing the high contrast objects only adds to the oversaturation of images. Although CAS is not perfect at overlapping the saturation of objects it’s hard to spot any difference with the naked eye.

Although image sharpening algorithms are working wonders with enhancing the gaming experience, they are not always perfect. On a closer look, you might find some over brightening of objects. Now it might not be visible while playing games, but it will be visible if you take a screenshot and zoom in.

If you evaluate the image sharpening algorithm, they will impress the gamers with image enhancement. These algorithms don’t interfere with gaming performance, as most of them are post-processing algorithms. Although there is quite a difference when compared side by side, there might not be much difference if images were not compared side by side. Sharpened images might look a bit too sharp and artificial but actual gameplay will compensate for that.