How to Run Shell Script?

Any command you normally want to execute in Terminal can be placed in a script file for execution. If you have a sequence of commands that you often want to execute, you can insert them into a script and simply call the script.

The shell script is a Bash script, a Unix shell type. It contains instructions written to the Bash and can be executed through the shell interface using text commands. A file extension at the end of the filename is a set of three or four characters, in this case, .sh. File extensions tell you what kind of file they are and say to Windows what programs they can open. Windows frequently links a default file extension program so that it launches automatically when you double-click the file. Sometimes you may get an error when you try to open the associated file if the program is no longer on your PC.

If text commands are typed inside the shell command-line interface, the Shell script can be executed. The shell script is mostly used by developers of applications and these files are very important for the Bash application, as the code mostly requires scripts and commands to run and make certain software work. And because Shell scripts are programmed using certain software and have commands to run the program, they are important.

Script files are known to be created and saved in bash because they are written in that language and are provided with an extension of .sh. Any command you normally want to execute in Terminal can be placed in a script file for execution. If you have a sequence of commands that you often want to execute, you can insert them into a script and simply call the script. 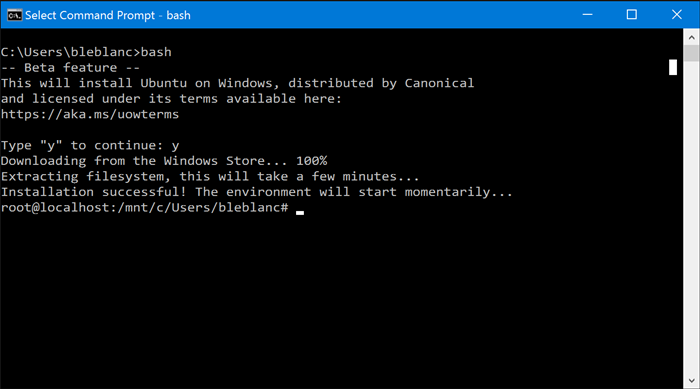 This can be done the same as other coded files created in the simple text editor. You can write a text file on the simple notepad editor on Windows 10, then save this text with the extension of .sh instead of .txt.  The commands and syntax to create one are all you need to know.

How to run shell scripts on Windows 10:

In the bash language, Linux scripts are written for Bash shell scripts. It contains commands that are usually available on the command line. In the Terminal folder to run, the Bash shell script files can be inserted and launched twice. There are certain methods through which you can run a shell script if you want to run Shell script on a Windows 10 then follow the instructions given below:

Method 1: Use Git Bash to run the shell script on Windows 10.

Git Bash is a Linux-like environment with an open-source command-line interface. It permits the compilation and running of Unix and Linux applications on a Windows system from a Linux-like interface. We can easily run a Shell script without problems by using Git Bash.

3.Following installation, double click the shortcut on the desktop to open the Git Bash Terminal.

4.During the installation process, you can select a shell script editor as well. You can run and edit the shell script through the Git Bash terminal.

1.You need to allow permission on your shell script that you want to run.

2.Open the command prompt on Windows 10 and give the directory of the file you want to open and then allow permission by using the CHMOD command.

To give the path and allow permission of the particular shell script, following commands shown as an example:

3.After this, simply execute the desired file by run command by using the same command prompt and directory.

For the execution of this method, you need to enable Linux on your Windows subsystem. Linux Windows Subsystem allows users to run Linux command lines on a computer with an installed Windows 10 OS. It was added to Windows 10 for the first time in 2016. Just like Linux is equipped with Wine software to run Windows software, Windows now has Linux software with WSL. Make sure the Ubuntu or other Linux distros are enabled in Windows 10. Ubuntu can install or render available under /.mnt extension all of your Windows files, then follow the given steps:

2.Continue to press Windows and R and enter appwiz.cpl.

3.Go to the end of the display and select the Linux option on the Windows Subsystem, press the OK button to install it.

4.To open the run box press the Windows and R keys, enter "ms-windows-store" in that particular box together.

6.To download the Linux distro, start by using the following PowerShell command:

7.You must start the process of Distro download by using the following curl command.

8.The installation process begins automatically after the distro has been downloaded. Specify a new account and username.

9.Some of the distros you can download will be upgraded with the empty or minimal package by sudo update command.

10.Begin changing the directory to the folder for the shell script and execute the Shell script.

Programs in Windows that can open shell scripts:

Just execute commands you know, and only if you are aware of how they work. To begin, somewhere build a file with the.sh extension. Then write a script for the shell.